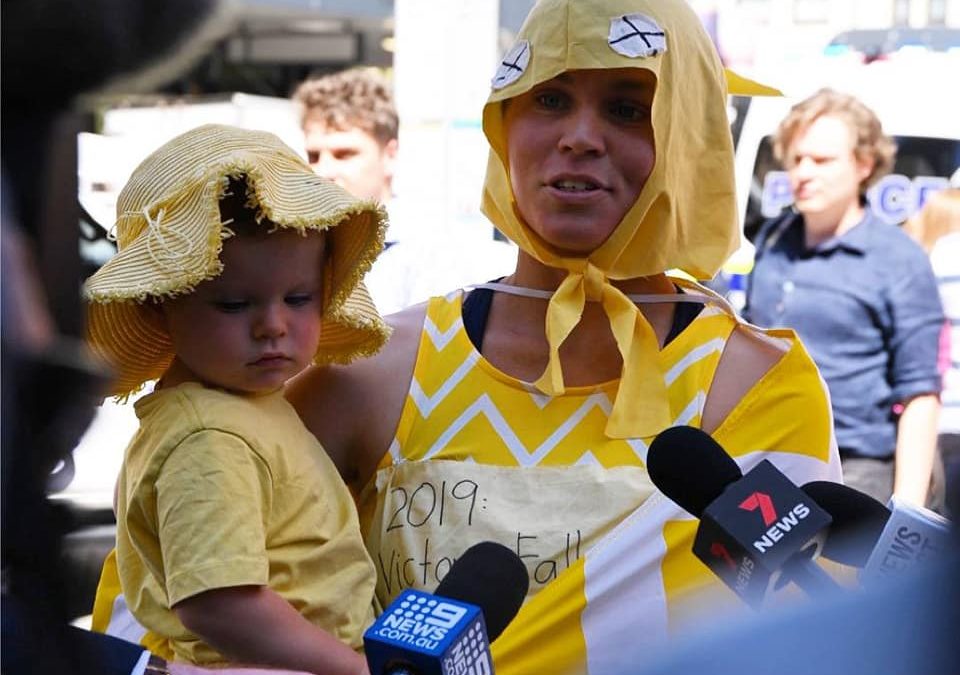 We love hearing about the diverse people who have joined XRWA. This week I spoke to Jess who has recently moved to Perth and joined the movement.

Jess and her partner Craig were both pilots in the eastern states. Life was good, they loved their jobs, and they did what they could in terms of recycling, reusing bags and the usual day to day environmentally friendly things so many of us do. They began their family with baby Luke and Jess’s dream was to fly for the Royal Flying Doctors once she went back to work. But it was when Jess’s second boy, Bryce, was a baby that the bushfires of 2019-2020 broke out in New South Wales. Even from a state away, the smoke was so thick she couldn’t see the other side of her street. It was a wake-up call so Jess decided to do some research to find out what was really happening to our planet.

What she found was devastating. The bad news about our planet pushed her into not only grief at the world her children would grow up in, but also feelings of powerlessness and depression. Meanwhile, her partner Craig was flying huge Boeing 777s over the bushfires and was shocked at what he saw. He couldn’t see the land for miles and miles for all the smoke clouds. The large plane, used to dodging storms and weather, struggled to avoid the massive thunderstorms created by the fires, smoke particles and instability in the atmosphere.

Then COVID-19 hit, and airlines were grounded. Craig had no work for many months, ending in redundancy late last year. But this time spent together as a family meant that they re-evaluated their life path. At first focusing on the environment, they began to question society’s dominant narratives: politics, capitalism, individualism and social justice.  They had a deep yearning to work towards not only a better future for the environment, but to rebuild a sense of community and purpose. Was flying planes really in alignment with what they wanted for their family and the future of the environment?

Whenever I wonder if we are on the right track, or it seems like things are moving so slowly that it is hard to see a successful end on the horizon, I imagine my children (who are now nearly 4 and 2) when they are grown up. I imagine them coming to me and saying ‘Mum, why didn’t you try? How could you know what you knew, yet choose to do nothing?’ Whether or not we are successful, I always want to be able to truthfully say that I did what I could.

With the realisation that it wasn’t, Jess embarked on a bachelor’s degree in teaching, and Craig started working part time to support the family while he decides what path to take next. The couple moved to Perth to be close to Jess’s family, and it was here, wanting to do more, they jumped into their Extinction Rebellion local group.

They began by attending the action for Bushfire Solidarity in Fremantle and have attended various trainings and actions since. Both Luke and Bryce join them on the gatherings and marches and even ended up on TV after lying down in the street for the 22nd March action in the city earlier this year.

Jess and Craig enjoy the community feel of being involved in XRWA. Jess is looking forward to the movement building in momentum and more people joining. She says that involvement looks different to everyone, whether it’s getting arrested, painting banners, feeding people, doing admin or just giving someone a hug at an intense moment, it is all valuable.

She no longer wants to be a passive and private participant in stopping the demise of the planet but feels it is important to show publicly what she can do to make it better.

I read once that ‘Justice is what love looks like in public.’ To work towards a just future, it is not enough to hope. We need to take action publicly.

Often people get stuck on the idea that either change must happen at an individual level (reducing waste, less flying, eating less meat, etc) OR at a systems level (government must decarbonise, stop logging, etc). This often leads people to feeling hopeless: ‘How can I, as one person, make a difference with my small changes?’ or ‘I cannot change systems by myself, so there is no point trying.’ It is so important right now that we attack the problem from both sides. Yes, individual changes are important, and yes, systems change is important. It is also true that it is near impossible for one person to change a system alone. But a small group of committed individuals CAN create change through civil disobedience. This is not a new idea—it has happened time and time again throughout history.

Her drive to be involved is not only to model responsibility and action to her two boys but also to inspire all generations to unite in intentionally creating a better future.

XR is a way to create impact together, through our individual and collective actions. We are stronger together than we are alone, and right now it is more important than ever before that we band together to create a just future for ALL beings on this planet, otherwise there may be no future at all.

Thanks Jess for being part of the XRWA movement and sharing your story.